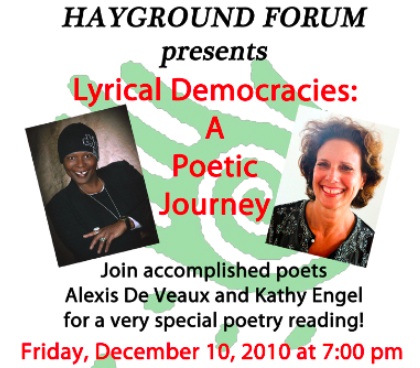 
Hayground School and Hayground Forum will present a special poetry reading titled Lyrical Democracies featuring Kathy Engel and Alexis De Veaux on Friday, December 10th at 7 p.m. Lyrical Democracies is the brainchild of two poets who want to inspire opportunities for the advancement of creative solutions to the wellbeing, peace, and wholeness of individuals and communities throughout the country. As poets, professors, organizers, and producers for more than 30 years, they recognize that the light that leads us and the glue that holds us are the power of our stories – all of our stories. They believe that telling stories to each other has the power to heal the divisions that separate us from each others’ humanities. They believe that meaningful change occurs through the fusion of the imaginative and the pragmatic, and that without community there is no change. Without recognition and exploration of the full stories within any community space, there is no community.

From the Sag Harbor Express

A Conversation with the Rev. Holly Haile Davis and her mother, Elizabeth Haile, two prominent members of the Shinnecock Nation who recently took part in “The Accidental and Intentional Neighborness of our Communities” a discussion with Rev. Alison Cornish held at the meetinghouse of the Unitarian Universalist Congregation of the South Fork.
You led this discussion at the UU Meeting House last week. How did it go?
Holly: I’d like to define discussion. Alison and I decided to begin a conversation last year at this time. It took the form of a dialogue sermon at the meeting house. A conversation between us in a public arena. It was very tentative, opening a door that in my mind has never been opened. What I mean by that is outsiders wanting to have more than a one-way conversation with the Shinnecock. It’s been very one-sided for 370 years. To have a conversation where more than one side’s will was being considered was represented in our dialogue sermon last November. And so this was then part two of that continuing conversation. .  ..... more
_________________
note: Rebecca (Becky) referred to in this article is Rebecca Genia, Rev. Holly Hails Davis' cousin and a member of the Inter-Tribal Historic Preservation Task Force devoted to preservation of ancient native burial sites.


As always our local food pantries need help with the ever increasing demand from those who just can't afford to feed their families. For example from January 2009 to January 2010 the number of families seeking aid tripled in East Hampton.  The demand is year round but increases at this time of year as one would expect with the seasonal employment situation. Here is a list of local food panties:

see www.islandharvest.volunteerhub.com to register and help with local food collection/distribution.