This letter was submitted to the Southampton Press:

My father's family emmigrated from what is now Ukraine in the 19th century. I sometimes hear about grave desecrations in eastern europe and wonder whether the graves of my Jewish forbears are still preserved.

In 2000 members of the Shinnecock Nation and civil rights activist Bob Zellner failed to stop developers from building over a sacred burial ground in the Shinnecock Hills area.

Now, another Native American burial ground may become a neighborhood of McMansions. A 13 acre property along Montauk Highway west of the Shinnecock Reservation in Southampton Town was recently cleared of trees in order to create a new housing development. This land is a burial ground sacred to the indigenous people on Long Island.

The Native Americans are asking for public support for ongoing negotiations between Southampton Town and Suffolk County to purchase the land with Community Preservation Funds. Even though Mr. Romaz, the owner has been granted approval to move forward with the development, he is still willing to sell the property for preservation purposes.

If you agree that this sacred land should be preserved, just as the gravesites of your ancestors should be, call the Southampton Town Community Fund Director, Ms. Mary Wilson at 631-283-6000 or write to her at Southampton Town Hall, Hampton Road, Southampton, New York, 11968. Also you may contact Suffolk Legislator Jay Schneiderman at 631-852-8400. Tell them Southampton respects all our ancestors. 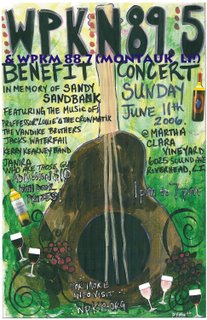 We have a great resource here in Eastern Long Island.

WPKM Montauk at 88.7 and WPKN Bridgeport at 89.5 are a community radio station run by over 160 volunteers.

Diverse political opinions and all kinds of music including blues, folk, latin, jazz and classical are heard in the course of a typical week.

But you will hear no underwriting announcements, commercials, etc. The station is totally listener-sponsored.

WPKM at 88.7 covers East Hampton Town, eastern Southampton and part of the North Fork. WPKN at 89.5 covers the rest of Eastern Long Island.

WPKN's locally produced public affairs programs include Counterpoint, Between the Lines and a local news cast which includes contributions from an East
End News Team and commentaries by local people. These programs are the balance to the corporate news heard on other media.

If you would like to meet some of the WPKM/N volunteers, listen to some great music groups including Jack's Waterfall and the Kerry Kearney Blues Band join us this coming Sunday June 11 at Martha Clara Vineyards, 6025 Sound Avenue in Riverhead from 1 to 7pm.

* June 11(Sunday): Benefit Blues/Folk Concert for WPKN/WPKM in Riverhead from 1 to 7pm

* June 12 (Monday): Documentary on Affordable Housing in Bridgehampton at 7pm

June 9(Friday): Film Series "The Human Face of Immigration" in Bridgehampton at 7pm

The first of the four films that will be shown on successive Fridays at 7pm, will be “A Day Without a Mexican,” introduced by Jim Claffey, founder of the LI Immigrant Alliance. Subsequent films will be Ang Lee’s “The Wedding Banquet,” “In America,” and “Mississippi Masala.” Subtitles in Spanish.

June 11(Sunday): Benefit Blues/Folk Concert for WPKN/WPKM in Riverhead from 1 to 7pm

A concert in memory of WPKN's Long Island Coordinator, Sandy Sandbank, will be held at the Martha Clara Vineyard , 6025 Sound Avenue in Riverhead Sunday afternoon from 1 to 7pm.

Scott Ritter, former Marine and head of the UN Arms Inspectors in Iraq
is featured in a documentary "A Path to Peace Saves Lives" to be
shown at the Parish Hall of St. Andrew's Church 122 Division St. in
Sag Harbor at 7pm Sunday, June 11. Enter from parking lot behind the
Church.

June 12 (Monday): Documentary on Affordable Housing in Bridgehampton at 7pm

The documentary about the need for affordable housing will be shown at the Unitarian Universalist Meeting House in Bridgehampton at 7pm. The video was produced by Barbara Jordan of the League of Women Voters of the Hamptons.

The Unitarian Meeting House is on Sag Harbor Turnpike in Bridgehampton just south of the intersection with Scuttlehole Road.

Come Support Native Communities in their fight for economic independence and against illegal intrusions on Native Lands by New York State.

A press conference and rally will be held at 12pm at the Poospatuck Pow Wow Grounds (directions below). A caravan will go to Shinnecock and a Walk will proceed along Montauk Highway to Shinnecock.

The event is hosted by the Shinnecock and Unkechaug Nations of Long Island asserting sovereign rights.

Directions to Poospatuck Reservation in Mastic:

From West or North:

Rte 27 or L.I.E (495) to William Floyd Parkway, South on Wm.Floyd
to Montauk Highway, right on to Mastic Road, left at fork on to Poospatuck Lane.

Fore more information and to sign a petition in support go to:
www.SupportNativeBusiness.com or call 631-924-1780

In the “Community Room” of the Bridgehampton National Bank