For a complete and updated East End Report click here AOLers: go to www(.)eastendrep(.)blogspot(.)com replace "(.)" with "."

See www(.)wpkn(.)org/today for program details on WPKM heard at 88.7 Montauk to Water Mill and WPKN 89.5 Bridgeport to Southampton and Southold.

Local News at 6:30 pm (Mon-Fri) has occasional reports from the East End.

Support Independent Media: WUSB and WPKN/WPKM need your support. Go to www(.)wpkn(.)org and www(.)wusb(.)fm and contribute on line.

WPKN will present "Yusuf's Story" a radio documentary about how the occupation of Palestine impacts one man and his village.

Yusuf's Story, produced by WPKN's East End Long Island News Team and written by Hazel Kahan of Mattituck was broadcast on Thursday, November 16 at 12 Noon on WPKN 89.5 and WPKM 88.7.

The half-hour program is now available on the web at this link.

Since 1967 Palestinians in the occupied West Bank have been surrounded by expanding Israeli settlements and a network of roads built solely for the occupiers. 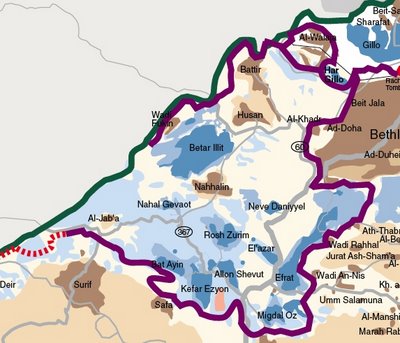 Now Israel is building a barrier - part concrete wall - part steel fence and roadways - in the name of security - along and within the Palestine side of the ‘green line’, its border with the West Bank.

In this map of the Bethlehem area from B'Tselem the purple line is the planned route of the wall. The Palestinian villages are shaded brown and the Israeli settlements in blue. Israeli controlled areas are light blue and white.

In the areas of the West Bank surrounding Jerusalem Israel continues to build and expand settlements.

South of Jerusalem Israeli government plans call for several Palestinian villages to be trapped between two barriers - a wall close to the green line and another wall, several miles west, blocking access to Bethlehem and the rest of the West Bank.

One of the villages in the planned path of the wall is the ancient village of Battir, a few miles west of Bethlehem. (Battir is just east of the green line near the top of the map.)

Yusuf lives in Battir and has worked for many years in nearby Aminadav in Israel.

Yusuf's story was written and is narrated by Hazel Kahan. Hazel is an activist and artist who lives in Mattituck. She travels frequently to Israel to visit family and friends around Jerusalem.

Information on the wall and Israeli settlements on the West Bank, including maps, can be obtained from B’Tselem, the Israeli Information Center for Human Rights in the Occupied Territories.

More information about Battir can be obtained on the
web at the web site of the Applied Research Institute - Jerusalem at
www.arij.org/

for details on these events scroll down: updated 11-14-06

* November 9 (Thursday): Talk on Ground Water in Bridgehampton at 7pm

* November 27 (Monday): Council for Unity Presentation in Riverhead at 7pm

* Saturdays: Native American Awareness Days at the Shinnecock Museum during November - 11 am to 4pm


November 9 (Thursday): Talk on Ground Water in Bridgehampton at 7pm

The public is invited to hear noted ground water expert, Sarah Meyland, at a meeting held by the League of Women Voters of the Hamptons on Thursday, Nov. 9 at 7:00 p.m. at the Unitarian Universalist Meetinghouse, 977 Sag Harbor Turnpike.

Ms. Meyland will speak about the current state of our aquifers on Long Island as well as the recent petition by Suffolk County Water Authority to allow it to override a Moratorium Law that has been in effect for twenty years..

Refreshments will be served.

A benefit for the newly formed Long Island Veterans for Peace Chapter 138 in the Sky Room at the Cinema Arts Centre - a concert by Jack Licitra of Jack's Waterfall ( www.Jackswaterfall.com ) with special guests.

Proceeds of this event will be going to the Lt. Erin Watada fund (www.ThankYouLT.org) and IVAW (www.ivaw.org).

The Cinema is located at 423 Park Ave. in Huntington, NY 11743, 100 yards south of Rt 25A, Main Street. Watch for the driveway entrance. Admission $10.00. All are welcome and encouraged to attend to help support these very selfless veterans and active duty servicemen, who have seen the horrors of war and the military, and are now spending their lives working for peace.


Visitors will see a huge Dug-Out Canoe being constructed near a traditional wigwam out in front of the Museum and videos depicting Native American life styles will be shown between 2:00 pm and 4:00 pm. The program will repeat each Saturday during October and November. The museum is at Montauk Highway and West Gate Road on the Shinnecock Reservation. See Repeating Events for more info.
____________________________________________

On Saturday, November 11 at 6 p.m. writer and film-maker Dennis Watlington will read from his recent memoir, Chasing America: Notes of a Rock N’ Soul Integrationist, published by St. Martin’s Press. Watlington writes of a black baby boomer’s crossover journey in the complex terrain of the second half of the Twentieth Century. His memoir traces the unfolding of the Civil Rights Movement through events in his life. Born in Harlem in the early fifties, Watlington struggled with an addiction to heroin in his youth, bounced from reform school to a New England boarding school, all the while chasing the American dream; looking to find an America that lived up to its rhetoric. Watlington is the voice of the generation raised on the currency of idealism and dreams.

The late George Goodman is the father of Amy and David Goodman.

The event is free.

The annual local protest against the School of Americas/ Western Hemisphere Intitute For Security Cooperation will take place on November 18, Saturday from 2:00-3:30 PM in front of the office of Rep Peter King located at 1003 Park Blvd, Massapequa Park. Directions below.

This is the weekend when the annual anti SOA vigil will be taking place in Fort Benning, Georgia and is an opportunity for local activists who do not go to Fort Benning to show solidarity with those who do by coming to this demonstration.

The SOA/WHISC is an institution long associated with human rights abuses. So many of the Latin American soldiers who have graduated from this "school" have committed numerous atrocoties against the civilians in their native countries. Many who have worked for labor & human rights in Latin American nations have been tortured & murdrerd by graduates of the SOA.

Representative King is one of the biggest supporters of the SOA.

Let's call for the closing of this institution!


Directions: Park Blvd can be accessed from Sunrise Highway. if you are coming from Suffolk County , get onto Sunrise H going west. Pass the Sunrise Mall & continue to Park Blvd. There is a House of Pancakes on the south side of Sunrise H. Make the turn at this traffic light & head north. Peter King's office is just north of sunrise H and is next to a post office.


The fight to close the military training camp for Latin American military continues. Close to 20,000 participants are expected to be there, many from Long Island.


November 27(Monday): Council for Unity Presentation in Riverhead at 7pm

The Riverhead Anti-Bias Task Force sponsors the second in a series of community presentations on Monday November 27, 7pm at Riverhead Town Hall. The Council for Unity, a national non-profit organization founded in 1975, has a history of successfully promoting inter-group relations and reducing violence in schools and communities. By implementing school-based and after-school programs in leadership development, mentoring, career, college guidance and gang prevention, the Council fulfills its' mission of empowering individuals and groups with the skills necessary to promote unity, safety and achievement. Riverhead Town Hall is at 200 Howell Avenue, Riverhead.

See Suffolk Peace Vigils for a complete list of weekly and monthly vigils.

Saturdays during November: Native American Awareness Days at Shinnecock Museum from 11am - 4pm

Native American Awareness Days will be held every Saturday in October and November. The public is invited to visit the Shinnecock Nation Cultural Center and Museum for a "Journey With the People" in murals and exhibits of Shinnecock History. Visitors will see a huge Dug-Out Canoe being constructed near a traditional wigwam out in front of the Museum. Inside the Museum videos depicting Native American life styles will be shown between 2:00 pm and 4:00 pm each Saturday afternoon. The Shinnecock Nation Cultural Center and Museum is on the Shinnecock Reservation at West Gate Road and Montauk Highway near Southampton, two miles east of Southampton College. (631) 287-4923

Join political action singing group. Participate in songs regarding environment, anti-war, labor, multiculturalism, civil rights, and other issues. Sing historic songs of struggle and social change. Explore the role of music in political movements. Experience singing musical arrangements, in four part harmony. Perform these songs for others. Contribute to the progressive movement while becoming culturally enriched. If you've ever wanted to be in a singing group, now is your chance! Experienced and non-experienced singers are welcome. All we ask is that you are able to sing on pitch. Rehearsals take place, Sunday nights from 7:00 to 9:00 in Lindenhurst. Anyone interested, please call Lisa Fishbein at: (631) 957-4954

The group meets at the Lutheran Church at Hayground Road and Montauk Highway on Thursdays at 6:30pmContact Pastor Vita at 631-537-1187 or pastorvita(at)verizon(dot)net

"Herstory" Writing Workshops in Spanish and English Mondays in Farmingville:

Herstory Writers Workshop meets every Monday afternoon at the Farmingville branch of the Workplace Project from 3 to 5. Both English-speaking and Spanish-speaking women come together to share and shape their life experiences through memoir writing. The workshop is conducted in both English and Spanish. Call 631-723-0150 for more information and directions to the center. Thursdays in East Hampton: Every Thursday Spanish-speaking women come together to share their writing with one another and receive feedback on how to structure and shape their lifewriting. The East Hampton workshop is open to East Hampton Town residents and is conducted entirely in SpanishIt meets every Thursday, 7-9 p.m., at the Senior Citizens Center, 128 Springs-Fireplace Road.Call 631-723-0150 for more information.


The regular monthly meeting of the South Fork chapter of the Progressive Coalition is at 6:30pm on the 2nd Tuesday of each month at the Lutheran Church on Montauk Highway & Hayground Rd. between Water Mill and Bridgehampton. Info: 516-541-1006, ext.55 or www dot lipc dot org

Send event listings for next week's report by 5pm Tuesday to