October 27 NYC - Fallout Against the War

Message from your Congressman

See WPKN Today for program details on WPKM heard at 88.7 Montauk to Water Mill and WPKN 89.5 Bridgeport to Southampton and Southold.

WPKN/M Local News at 6:30 pm (Mon-Fri) has occasional reports from the East End.

Jeff Halper of the Israeli Committee Against House Demolitions tells about his work and explains the reality of the Israeli occupation of Palestinian lands.

Rev. Holly Haile Davis and the Thunderbird Sisters at the Southold UU
Originaly broadcast on March 29.

WPKN presents the Reverend Holly Haile Davis and the singing Thunder Bird Sisters of the Shinnecock Nation on Long Island. The program was recorded as they led the Sunday service at the First Universalist Church of Southold, New York on January 14 of this year.

The program includes musical selections by the Thunder Bird Sisters and stories from the gospel according to some Native Americans.

An archive of Counterpoint programs are accessible for free at http://www.whiterosesociety.org/ Some segments of Counterpoint are edited for re-broadcast on the syndicated Between The Lines radio newsmagazine.

"Going Solar" - In this special program, our guest, renewable energy expert Gordian Raacke, will explain how solar energy systems can be used in existing homes.

For more Information on Peace Activism on LI

The East End Report is compiled by Tony Ernst
Send corrections or comments to eastendreport@yahoo.com

Protesters Can Measure Progress, but ‘Success’ Can Be Elusive*


We’re writing regarding Tom Clavin’s column [“Freedom is local (Part III),” October 11] about the anti-war protesters who, he claims, made a deal with the East Hampton police, and who, he now believes, are ineffective. That would be us. The same people who organized before the war began have been out there week after week, month after month, at vigils, forums, marches, with homemade coffins on the highway, in churches, in Sag Harbor, Bridgehampton, East Hampton, New York and Washington, D.C.

We appreciate his many columns illuminating our inadequate work. We haven’t stopped the war—it’s true. And we appreciate his role as a journalist calling upon others in his field, as a group, to put an end to the capitulation with a horrendous war and accompanying policies. He’s clearly doing his part as a leader in his field. Mr. Clavin, however, seems to be confusing two things: a negotiation with the village about a protest route, and a decision to accept dismissal of charges in our case and not sue the Village of East Hampton for the absurd arrests on April 15, 2006, and the delay of justice. For the record, we never intended to sue the Village of East Hampton. We agree with Mr. Clavin that there should not be barricades or yellow bands limiting public protests in East Hampton or elsewhere in the country.

However, progress was made between April 2006 and August 2007. Not success, but progress. In case Mr. Clavin hasn’t been watching, the policy of restricting protests post-9/11, in the Bush era, has been taking place all over the country, and especially in New York City. Groups have choices: to negotiate when planning a nonviolent legal protest, or to simply march and risk arrest. Both are valid tactics depending on the goal at the time. Organizers have to be clear, though, what is being done in order to be responsible for those who might not have the same options, i.e. risking arrest.

In the case of East Hampton, a choice was made each time, although involving different people. A deal was not made, but an agreement about what and where. A few clarifications: Those who met with the police and the village (none of the five who had been arrested) did what organizers always do when planning a nonviolent legal protest—they negotiated. And they came out with a fairly decent result, given that East Hampton has no precedent of strong demonstrations, and given what had taken place the year before. In the height of shopping and beaching season, Main Street was disrupted with an anti-war march and the images of soldiers who’d been killed. I don’t know who gave Mr. Clavin the idea that no one’s mind was changed, or what he thinks would have changed minds. Mr. Clavin suggests that the demonstrators behaved like middleschoolers (whatever that’s supposed to mean—middle-schoolers are docile and obedient?), and, because of that, the charges against us were dropped. It’s true that the police referred to how well the demonstration worked when recommending dropping the charges. But that’s not because it was a weak, docile demonstration; it’s because they knew, based on all the bad publicity the village received from our arrests, that they had to handle it differently. The August 2007 demonstration was on the front page of several local newspapers, and the display in the window of BookHampton stayed up for more than a month. The fact that there had been a negotiation with the police was pro forma.

Unless planning a non-violent civil disobedience—which is a tactic most of us have engaged in, and will again—organizers meet with the police in advance of a demonstration to agree on march route, etc., on behalf of those participating beyond the key organizers. It’s a tactical matter. United For Peace and Justice does it every time there’s a major national mobilization. It’s not making a deal but figuring out what will be effective and responsible in the context of that particular activity. The point here was to create a public space to protest the war. That was achieved; many thought the August demonstration in East Hampton had an impact on a number of levels. Regarding the dismissal of our charges: Tactically, we decided—given that we all spend a good deal of time and resources working to stop the war and on other urgent public issues—to move on and not spend the time and resources on a lawsuit. Contrary to Mr. Clavin’s assertion about a lost opportunity, this small case had received significant ongoing publicity and attention. Most of us believe that our point had been made, if not in the courtroom then certainly outside the courtroom. It’s true, we didn’t have “our day in court,” and we didn’t sue. Perhaps Mr. Clavin could help us, in general, to keep our principles straight and be more effective so we don’t continue to sell ourselves out by our good behavior. We’re just wondering if we missed his columns at the time of the arrests, and after the several court dates when our case was bumped. Or when the “Women in Black” stand out in the cold, sometimes only four at a time, week after week. Perhaps he was busy telling other activists protesting hideous policies in their spare time how to do their job? When one is in the business of trying to stop wars and stand up for constitutional rights, one makes choices, or rather a collective of participants learns how to make choices together. No one choice is the beginning or end of the work; it’s a process.

Our commitment is to keep going, keep trying, and keep learning, so we can make an impact. One doesn’t always know, at a given time, what will have the greatest impact, but we are part of a larger movement of people dedicated to stopping the war, preventing the next one, and changing the accompanying policies that are degrading so many people here and around the world. That’s what we do. Sometimes you make a decision about how to proceed based on the larger picture, what else needs to be done, resources, or life. One thing many of us have learned is that it’s important to gather strength, experience victories, even if imperfect and small in the face of the terrible injustices. If Mr. Clavin has lost faith in our effectiveness, that’s a shame for him. Perhaps he will build a movement. We have work to do. It’s possible we—meaning those who planned the August demonstration, which included one of our attorneys, the leader of the East End Vets, and the next Southampton Town supervisor—made wrong decisions regarding the August demonstration and our court case. There’s no way of knowing whether a lawsuit would guarantee that protesters won’t be wrongly arrested again. It seems that the bad image was what mattered. We are not arrogant enough to think we always make the right choices. What we do know is we will continue to work to stop the war, along with many people on the East End, and thousands of others nationwide and globally. Perhaps Tom Clavin should think about how to do that as well. 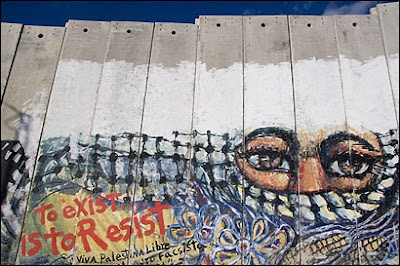 Dr. Kahan will explore how art is used as a form of resistance to the occupation of Palestine on the separation barrier, Israel's illegal 400-mile structure that includes a 25-foot-high wall in the occupied Palestinian territories.

Indonesian-American retired pastor and international activist will talk about his participation in the Ecumenical Accompaniment Programme in Palestine and Israel of the World Council of Churches. He was stationed in Ramallah where he worked with Palestinian Christian communities.

Co-Sponsors: Committee for Peace in Israel-Palestine

Dr. Jeff Halper of the Israeli Committee Against House Demolitions visited the Bridgehampton area earlier this month as guest of the Committee for Peace in Israel-Palestine and East End Women in Black. Dr. Halper spoke at the Unitarian Universalist Meetinghouse. He pained a grim picture from the standpoint of peace and the possibility of a viable Palestinian state due to the continuing expansion of Israeli Settlements and the separation barrier within the West Bank.

Halper's view of the forthcoming peace talks and the relation of the US to the conflict was the subject of an interview conducted by Scott Harris of WPKN's Between the lines. This nationally syndicated program will be heard Saturday at 2 pm and again next Tuesday at 5:30 pm at 89.5 FM Bridgeport or 88.7 FM Montauk or www.wpkn.org.

Listen to the Halper interview here:

Dr. Halper is the author of "Obstacles to Peace" published by the
Israeli Committee Against House Demolitons.