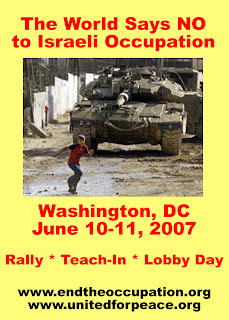 People around the world are joining together in a global Day of Action as “The World Says No to Israeli Occupation” to protest the 40th anniversary of Israel’s illegal military occupation of the Palestinian West Bank, Gaza Strip, and East Jerusalem, and Syrian Golan Heights.

In the United States, thousands of people from all over the country will converge on Washington, DC on June 10 and 11, 2007 to send a clear message: The United States Says No to Israeli Occupation! A rally is planned for June 10 at 2pm at the West Lawn of the Capitol. June 11 is Lobby Day.

On the east end the Committee for Peace in Israel / Palestine (COPIP) and East End Women in Black invite you to join us in DC.

Send an email to hcliffordws@aol.com if you are interested in
attending the June 10 event.

The events of June 10-11 are co-sponsored by United for Peace and Justice and the US Campaign to End the Israeli Occupation.