We Begin Here: Poems for Palestine and Lebanon 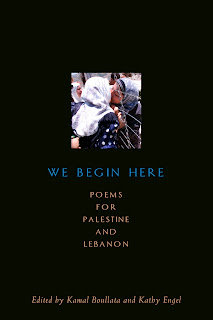 Interlink Press
“No 'we' should be taken for granted when the subject is looking at other people's pain.” —Susan Sontag

We Begin Here: Poems for Palestine and Lebanon contains poems written in response to the 1982 Israeli invasion of Lebanon together with new ones rising from the 2006 Israeli war on Lebanon.


Following a great tradition of poetry throughout history, this book shows the vast conscience and lyrical spirit of resistance on the part of poets in support of the dignity, rights, and humanity of the Palestinian and Lebanese people.

We Begin Here is an affirmation of the human and poetic spirit, reminding us that poetry and struggle always "begin here," always leading us back to ourselves, to each other, in community, seeking truth and beauty across all borders.

Kamal Boullata is a visual artist, writer and editor living in France. Poetry books he edited include Women of the Fertile Crescent: An Anthology of Modern Poetry by Arab Women and Stranger in a Distant City: Poems by Mahmud Darwish. He also co-edited with Mirene Ghossein The World of Rashid Hussein: A Palestinian Poet in Exile and If Only the Sea Could Sleep: Love Poems by Adonis. He is the author of Faithful Witnesses: Palestinian Children Recreate their World and Recovery of Place: A Study of Contemporary Palestinian Art (in Arabic).

Kathy Engel is a poet, teacher, producer and consultant for social justice and peace organizations. Her first book of poems Banish the Tentative, was published in 1989. Her work has appeared in numerous anthologies and publications. She is the founder of MADRE, an international women's human rights organization, the former President and co-founder of Riptide Communications, co-founder of East End Women in Black and KickAss Artists. Her new book of poems and personal prose, Ruth's Skirts is forthcoming from IKON. She traveled to Palestine in 1990.