"Who can protest and does not, is an accomplice in the act" Talmud ( Sabbath, 54b)

WPKN/WPKM - Tidings from Hazel Kahan - Downloads
including "Tipping: Hazel asks - do we have to?"

Note: Channels 20 and 22 now reaquire a digital capable TV or converter box. A digital box is available free until 10-16-08.

Go to Cablevision.com/update for more information.

From United For Peace & Justice:

On October 7, 2001, the US began a military operation in Afghanistan and launched the opening shot in its "War on Terror."

A few weeks earlier, on September 15, 2001, Rep. Barbara Lee was the lone voice in Congress to vote against the use of force on Afghanistan. She warned, "If we rush to launch a counterattack, we run too great a risk that women, children, and other noncombatants will be caught in the crossfire. [W]e must be careful not to embark on an open-ended war with neither an exit strategy nor a focused target. We cannot repeat past mistakes."

Today, seven years later, the "War on Terror" is an utter failure; the fighting, the death and destruction, continue in both Afghanistan and Iraq; and there is no end in site. There is now talk about sending more U.S. troops and expanding the military operations in Afghanistan.

Is this an appropriate course of action?

In response to the horrific crimes of September 11th, we were told that US troops had to be sent to Afghanistan to find Osama bin Laden and destroy al-Qaeda. But neither has happened and war in the region has expanded. In the past two years, the number of US service people killed in Afghanistan has grown dramatically. The lives of the Afghan people are no better today than they were seven years ago -- by some measure, things are far worse for them.

Today, on this solemn anniversary, the second Presidential debate will take place. While the Iraq war and occupation have become widely discredited and unpopular thanks to massive efforts by the peace movement and the deteriorating situation on the ground, we have been largely silent on Afghanistan. Today, the peace movement must speak out!

We urge you to call or email the campaign offices of both Senator McCain and Senator Obama and tell them you want a surge in diplomacy, not an expansion of a deadly, costly war.

United for Peace and Justice urges the antiwar movement to take a clear stand against the war in Afghanistan. We have developed a list of resources which can help you learn more about this war and what you can do to help end it.

Book Launch Party for Zellner's "The Wrong Side of Murder Creek" 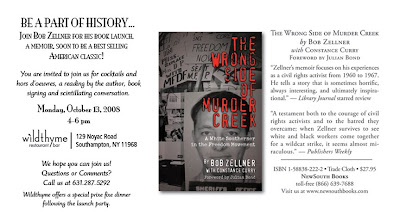