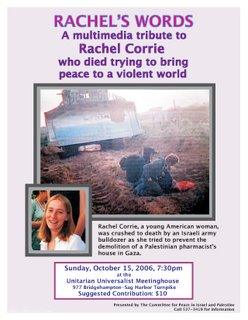 A message from Vic Teich, Committee for Peace in Israel and Palestine :


Rachel Corrie is the young American woman who was crushed to death by an Israeli army bulldozer as she stood protesting the destruction of the house of a Palestinian pharmacist.


On October 15th at 7:30 p.m. at the Unitarian - Universalist Meetinghouse, the Committee for Peace in Israel and Palestine is presenting a multimedia tribute to Rachel Corrie.


The program will include dramatic film of Rachel in Palestine; of Rachel's mother and father; of the young protesters standing in front of the bulldozers even as the monstrous machines clank forward. Caroline Doctorow and Rhonda Liss will sing, and Liz Rogers will accompany on the piano. Simon Shaheen, a Palestinian, plays a mandolin-like instrument called the u'd against images of destruction in Rafah, where Rachel was killed.

Rachel's e-mails to her parents from Rafah will be read by Lorraine Dusky, Anthony Brandt, James McMullan, Kate McMullan, Genie Henderson, Lily Henderson, Star Black and Tom Leo. Here is the description of the audience's reaction to a reading of the e-mails at the Riverside Church in New York:

"But the focus of the evening were the readings of Rachel's emails. Rachel spoke to us in a language so clear, powerful, simple and loving that no-one could ignore the appeal of her voice and her message.

Rachel's story will not move the Israeli lobby that has been so successful in suppressing the truth about Israel and Palestine. But help us inform the great confused middle who pay little attention to what goes on in Palestine. Ironically, the best protection for Israel's survival is to get out of Palestine.

The Unitarian-Universalist Meetinghouse is a new building at 977 Sag Harbor-Bridgehampton Tpk., just south of Scuttlehole Road on the east side of the road.